Some Perspective, Noise Aside.

The stock market had a volatile week, with both news and price noise. So, let’s gain some perspective:

The S&P500 had a strong day today, although it lost most of its gains by the closing. We do, however, still remain bullish. Here’s why:

As long as the offensive (risk-on) sectors of the S&P500 remain bullish, the stock market rally is bound to continue. This is important because they account for over 64% of the Index. As long as they hold above their August lows, they remain bullish in our book. Also worth noting is that on strong “up” days, we have continued to see leadership from offensive sectors and from the tech-heavy Nasdaq Composite. These are also very bullish indications.

Keep in mind, however, we will probably continue to see volatility in the short-term, especially as the Fed meeting approaches (Oct. 29-30th). 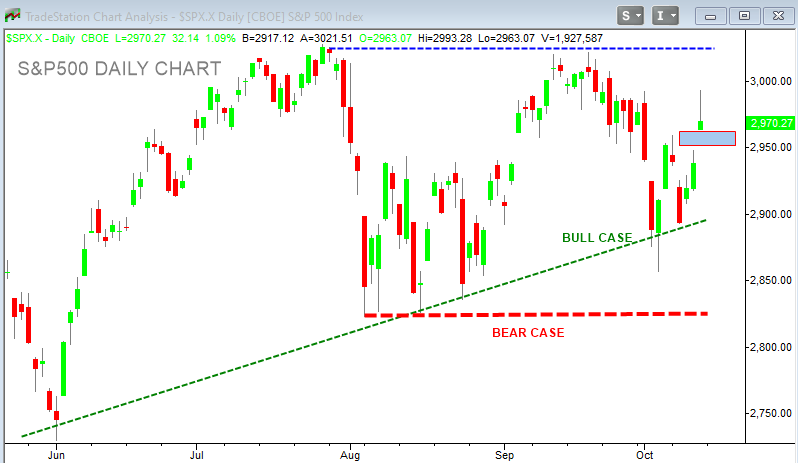 Strength in the 10Yr Treasury Yield certainly helped stocks this week, as bonds sold off. Although investors doubted any positive outcomes from the US/China talks earlier in the week, stocks rallied on news that China was willing to accept a partial trade deal. Trump tweeted, “Good things are happening at China Trade Talk Meeting,” as stock continued their advance. The talks concluded as expected with a partial trade deal, although mainly focused on agricultural and tariff relief from the U.S. Of course, we can expect more volatility to come as the trade talks and tweets continue.

Furthermore, consumer spending in China and India (which make up a third of the world’s consumers) is slowing, further confirming the reality of a slowing global economy.

Lastly, the Fed’s balance sheet expanded again this week, as they announced they will purchase Treasury Bills at least into the 2nd Quarter of 2020. As the Fed’s assets increase, the stock market tends to rally alongside it. You know what they say, “Don’t Fight the Fed.” And we don’t intend to…