Yesterday the market rallied on the Federal Reserve’s (Fed) announcement that it would remain “patient” in raising interest rates in 2019. The market loved that change in rhetoric since the December Fed meeting. It seems the Fed is now acknowledging lower inflation and slowing global growth.

Abroad, Italy’s GDP continued to drop in the 4th Quarter 2018. German retail sales suffered the most since 2007 in December and they may have an impact on its 4th Quarter GDP number. And as for the U.S., we’re still awaiting a release date for our GDP number (given the government shutdown).

Domestically, it’s still earnings season. While some companies are beating expectations, many are still reporting sales and earnings growth below 2nd and 3rd Quarter 2018 numbers. It remains to be seen whether the Fed’s more relaxed monetary policy can help the U.S. economy regain traction. The bigger question at this point is whether the market has discounted enough economic contraction to continue its secular bull market trend.

Our model indicates that the short-term trend for the S&P500 remains bullish. The mid-term is now also bullish and the long-term is neutral. But the main trend is still bearish. (For reference, see table below)

Now, while the short and intermediate terms are bullish, there are a few items to note in the move:

In conclusion, if the market has indeed priced in enough economic contraction to continue its bull market trend, our investment process will tell us. If that’s the case, we’ll change our stance. However, for now, there are some things that don’t add up. One of the problems we see with yesterday’s bullish reaction from equity markets is that if the rally is sustainable, then it’ll need to continue upwards regardless of lower sales/earnings growth numbers. 36% of S&P500 companies reported aggregate year over year earnings growth of 12.7%, down from 16-18% growth after the first 10% of companies reported last week. Furthermore, it’s substantially lower than the 24-25% earnings growth reported in 2nd and 3rd Quarter 2018. And if indeed more accommodative monetary policy helps the economy regain traction, then the Fed will end up needing to switch its stance again. And we may end up with another steep selloff like we saw in December.

For now, we’re sticking to our trading plan, as discussed in our January 7th post: Mathematically speaking, in our opinion, the S&P 500 Index can move from current levels (Friday’s closing of 2531.94) to a range from 2600 to 2750. If it gets there and a breakout occurs with higher volume and lower volatility, the breakout may be credible. But if it gets there on lower volume and unchanged volatility, most likely the move is a head fake and the index will roll over. Consider that the worst case for a credible breakout is that you may be a bit late to catch the new leg up. But if the move up is a head fake, this may be the last opportunity you have to get out of the way and protect your capital.

Bottom-line: Regardless of our bull/bear case, we wouldn’t be surprised if the S&P500 ends up moving sideways within a range. It’s worth noting that today’s price action was bullish, closing with higher volume. However, the rally occurred with defensive sector leadership and still increased levels of volatility.

Plan your trade. Trade your plan. And adjust accordingly. 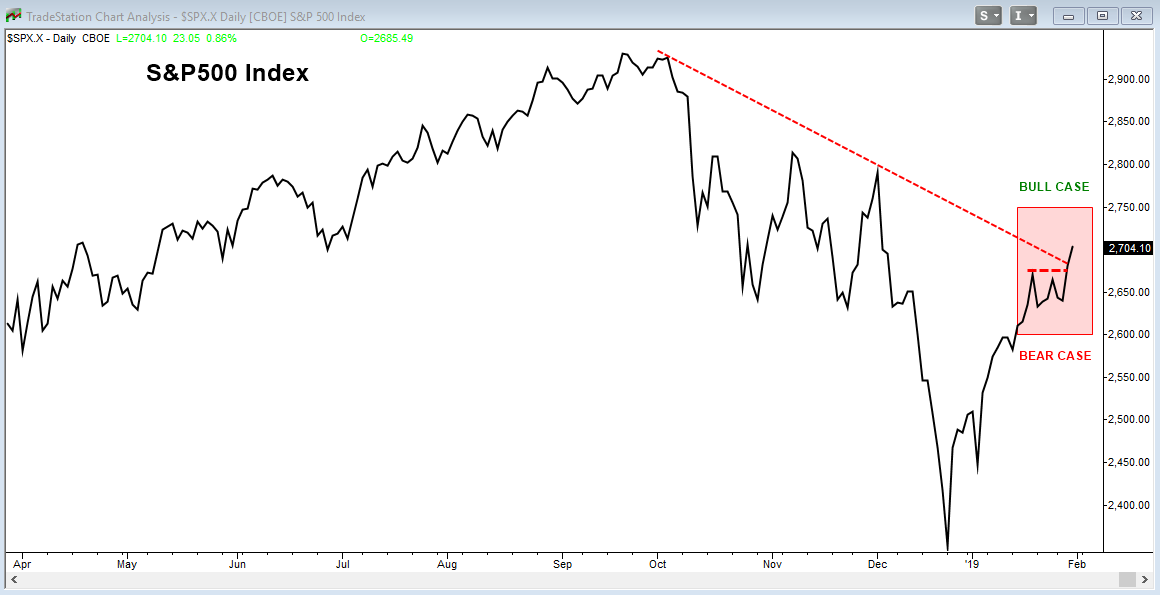